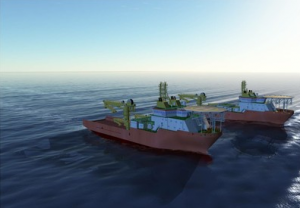 The research and development project, co-funded by the Federal Ministry of Economics and Technology (BMWi), is called PerSee which stands for “Performance von Schiffen im Seegang” (performance of ships in sea-states). It aims at establishing new processes for the optimization of ships in moderate seas, considering the effects of waves on both hull forms and propellers, and at identifying safety requirements for ships in heavy seas. Operational scenarios as well as minimum speed and power requirements are considered.